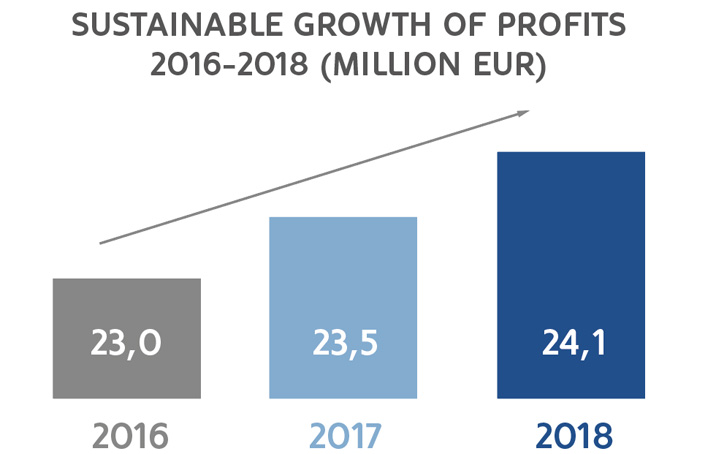 MoraBanc has closed 2018 with net profit up 2.3% at €24.1 million. Maintaining its positive trajectory, the Bank has had a second consecutive year of growth, based on a strong balance sheet which shows improvements in the most important ratios.

Client funds remained stable at €6.42 billion euros, despite adverse market conditions in the final quarter of 2018.

Pedro González Grau, MoraBanc’s Chairman, highlights that “we’re very satisfied with the consolidation of our growth after a number of years devoted to the Bank’s profound transformation, in a particularly demanding environment for banks, both internationally and in the Andorran market.” General Manager Lluís Alsina emphasises that “practically all MoraBanc’s significant indicators improved in 2018. We’re a solid bank, fully digital, with an effective team 100% focused on the client, and those key factors enable us to continue to grow.”

MoraBanc is firmly committed to Andorra. The Bank’s healthy balance sheet has allowed lending to businesses and individuals to grow by 9.6% to €1.040 billion. New loans to clients rose by 35%.

In international terms, MoraBanc also closed 2018 with positive figures. Assets under management managed in Miami and Zurich increased, accounting for 29% of the total for the Group and profits from subsidiaries grew 141% over 2017.

All figures for 2018 have been prepared in accordance with European financial and accounting rules, IFRS (International Financial Reporting Standards) and the CRD IV solvency Directive. MoraBanc has adopted international norms and is committed to transparency, essential to client and stakeholder trust, which also makes it comparable with other banks. 2018’s figures put MoraBanc above the average for banks for the main indicators such as solvency (CET1 fully loaded), liquidity (LCR) and profitability (ROE).

MoraBanc’s excellent progress was rewarded with international recognition in 2018. The Bank was named 2018 Bank of the Year in Andorra by The Banker magazine from the Financial Times group. MoraBanc has won this award five times in the last ten years.

The Bank’s continuous and ambitious investment aimed at making it a leader in digital banking was also recognised. First by the clients themselves. Since 2016 the number of users of its online banking has increased of 140% and transactions of 66%. For the constant improvement its digital offering MoraBanc’s received the awards for the best app and best online banking in Andorra from specialist journal World Finance for the second year in a row.

MoraBanc has allocated 3.2% of its profit to corporate social responsibility, including cultural events such as the Music and Dance Season, charity initiatives like the Solidarity Card, which supports 18 NGOs and community organisations in Andorra, and sponsorship of sports teams such as BC MoraBanc Andorra.