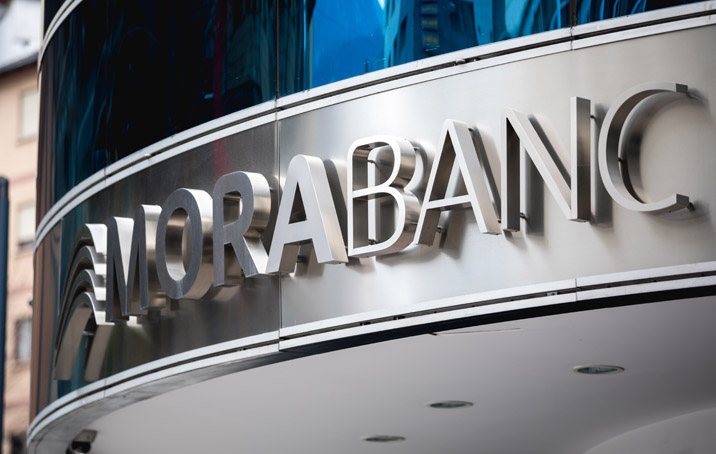 MoraBanc ended the year 2017 with a growth rate of 3.6% in net profits, which stood at €23.5m on a comparable basis. The bank recovered the path of organic growth after completing its strategic plan and the operational and business transformation process which it initiated three years ago to adjust to the regulatory changes that have taken place in Andorra’s banking industry.

MoraBanc’s firm commitment to digitisation, its ability to anticipate regulatory requirements and the improved alignment between its sales teams and the products on offer have been key in enabling the bank to resume strong recurring growth of earnings.

MoraBanc announced a series of changes to its corporate organisation as its accounts were being approved. Having presided over MoraBanc for two years, leading the bank’s transformation process, sat on the Board of Directors for more than two decades, and 10 years as Private Banking and Capital Markets manager, Jordi Mora handed over the presidency to Pedro González Grau as he reached the statutory retirement age.

González Grau joined the company as managing director in 2014 and has led the strategic plan to transform the bank ever since. With this appointment, he has become the first non-family-member chairman of the banking group, which confirms MoraBanc’s transition towards a more professionalised corporate governance model. González has also been specifically mandated by the Board to advance corporate development, boost the growth of investments outside Andorra and promote organic and inorganic expansion abroad.

Former general Business manager Lluis Alsina Álvarez has been appointed new general manager of the bank, reporting directly to the Board. His task will be to consolidate and strengthen MoraBanc’s presence in Andorra, where the banking group seeks to become a major market leader.

The recent changes in the Board include the appointment of Board members Joan Quera Font, former general manager of the bank between 2003 and 2011 and a director between 2011 and 2015, and Marc Mora Guerin, in replacement of Lluis Álvarez Mora and Jordi Mora respectively.

The new chairman made a positive appraisal of the year. “We have returned to a path of sustained growth thanks to a process of transformation and modernisation aimed at making the bank much more competitive in an increasingly demanding financial market. MoraBanc has transformed itself into a more flexible, more modern, more digital and stronger bank in a record time. Building on these strengths, we can now face future challenges with complete confidence”.

In addition to growth in earnings, the figures for 2017 show that the bank has bolstered its balance sheet. Of particular note again is the company’s high solvency ratio, which reached 27% according to the INAF ratio and 18.9% according to Basel III CET 1, largely exceeding the minimum requirements and leading the industry. Another sign of this solid performance is the bank’s strong liquidity ratio, with a regulatory ratio of 60.7% (INAF ratio). Liquidity management also met the best standards and practices in the industry, including Basel III LCR and NSFR ratios, which MoraBanc clearly exceeded. The default rate stands at 3.9%. All these figures can be compared with the best standards in the European banking industry. Another outstanding figure is ROE, which rose to 8.4% in 2017, well above the European average for the sector.

In the first year in which the automatic tax information exchange system (IAI) was implemented in Andorra, the assets managed by MoraBanc fell only slightly by 2%, whilst the Group’s total client resources amounted to €6.54bn at the end of 2017.

Credit investment growth was in line with MoraBanc’s commitment to extending credit to society. In this regard, the amount of funds allocated to individual loans rose by 10% last year. The bank’s commitment to Andorra was also recognised internationally as it was named Best Commercial Bank 2017 in Andorra by the International Banker magazine.

With the return to growth in earnings, the bank has completed the strategic transformation plan it launched three years ago in anticipation of the new international regulations that have changed the shape of the Andorran banking industry.

In view of the need to improve its value proposition, the bank has committed itself to a significant investment in digital banking, around which it has built a comprehensive multichannel offer that has become a digital reference in the domestic sector, with a 90% increase in the number of client accesses and a 36% rise in online money transfers during the first year. In recognition of its leading position, the World Finance magazine named MoraBanc best digital bank in Andorra in 2017 and elected its mobile application as the best in the country. At the same time, the Group has optimised its infrastructure and resources with a view to becoming a more efficient organisation. It has modernised the team of professionals specialising in compliance and new technology, and in parallel with this, it has updated both its client segmentation and its portfolio of products and services to meet clients’ needs more efficiently.

One of the key objectives of the strategic plan was to implement the transformation process in the shortest time possible, with the purpose of converting the bank into an industry pioneer in adapting to the new characteristics and demands of the market. After investing in both efforts and resources, the bank has resumed growth and completed a full cycle, entering a new stage of its development with complete confidence.

Our objectives for 2018: Growth

MoraBanc has set itself the goal of continuing to grow both in Andorra and beyond its borders through its subsidiaries in Zurich and Miami. In Andorra, the bank’s central arguments for increasing its market share in both clients and resources are its capacity and vocation to extend finance to individuals and businesses; the provision of a powerful digital bank; and a renewed portfolio of products and services. From an international perspective, the bank’s core growth levers are its experience in asset management and its differential positioning as a specific and highly qualified option for international clients looking to diversify their assets.

Going forward, González Grau stressed that MoraBanc has become stronger and more resilient now that the bank’s transformation is fully operational and advancing at a steady pace. “Our current objective is to consolidate the bank’s sustained growth. We are in a position to do so and we have the strength to assess various options that will help us optimise both organic and inorganic growth”.

In 2017, MoraBanc allocated 3.1% of its earnings to actions in support of the local community by cooperating with institutions and projects from different backgrounds. The “Solidarity Card” granted to 17 NGOs in Andorra, sponsorship of the ACB League MoraBanc Andorra basket-ball team, environmental policies, involvement with the Andorran Ski and Mountaineering Federation and the acclaimed MoraBanc Music and Dance Season of Andorra la Vella are all at the heart of MoraBanc’s corporate responsibility strategy. 2017 also saw the reopening of Casa Vicens, Gaudí’s first house, as a museum in Barcelona after it had remained closed to the public for 130 years. The bank’s growth objectives demand a clear commitment to the environment and a management approach that is both socially responsible and socially oriented.