MoraBanc, Andorran Bank of the Year 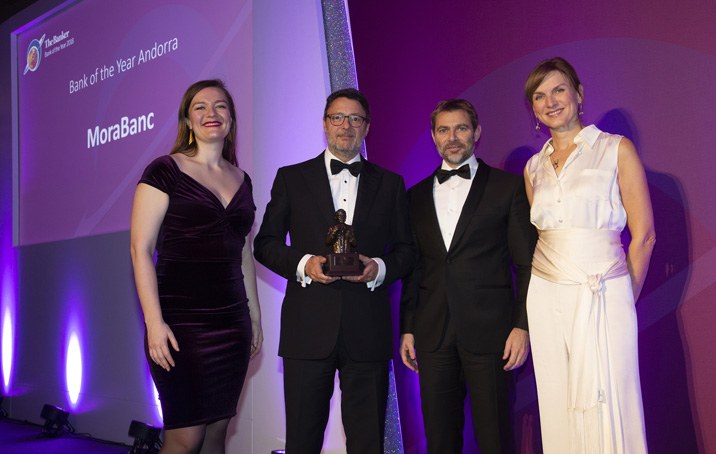 MoraBanc has been named 2018 Andorran Bank of the Year by The Banker, a journal published by the Financial Times Group. This is an award which acknowledges the work on the transformation and adaptation of the bank, whose results recovered their upward trend in the last financial year. In addition, it has just presented a strategic plan for achieving profits totalling 30 million Euros by 2021, a growth of 25% in 3 years. This is the fifth time that the bank has received this international award in the last ten years.

Pedro González Grau, MoraBanc’s Chairman, and Lluís Alsina, its General Director, received the award on Thursday at a gala ceremony held in London. According to González, this distinction “is particularly significant at this time, during the transformation of the Andorran financial centre, and it recognises our strategy based on fast, effective and far-reaching activity, enabling us to fully transform the bank and focus on expanding in Andorra and abroad”. In Alsina’s words, “the award encourages us to pursue our ambitious future goals to enhance our growth”.

The Bank of the Year Awards conferred by The Banker assess banks’ ability to generate profits and achieve a competitive advantage so as to provide the best service for their clients, an objective achieved by MoraBanc as a result of four main factors highlighted by the Financial Times Group publication: its strength and high degree of solvency, its successful digital transformation, its rapid and effective adaptation to the international regulatory requirements and its ambitious growth plan.

A strong, digital and expanding bank which aims to earn 30 million Euros by 2021.

Having achieved the goals of the transformation plan executed over the last three years, MoraBanc is now looking towards the future with the aim of continuing to expand over the coming years. The new strategic plan envisages achieving profits totalling 30 million Euros by 2021, given that it is the leading bank in Andorra.

MoraBanc has continued to grow in 2018, as demonstrated by two figures in its first-half results: its client resources increased by 6.4% and loans rose by 5% between January and June.

The strategic plan for the next three years is based on three goals:

This The Banker award endorses MoraBanc’s excellent strategic management in recent months, which was acknowledged by other prizes in 2017, including one from the World Finance magazine for the best online banking and the best banking app in Andorra and another for the best commercial bank in Andorra from the International Banker publication.