There is no age requirement for innovation: they story of a boy and his toy

The future looks bright for young David Aguilar, the 18-year-old Andorran who has garnered worldwide attention for building a prosthetic arm using Lego blocks. We sat down with this innovative teen to talk about his story and his ideas.

You created your first prosthesis with Lego blocks when you were only 9 years old. Do you remember what made you turn your toy into a prosthesis?

I suppose that subconsciously my life’s biggest dream has been to have an arm, and I’ve always wanted and dreamed of being just like all the other kids. From a very young age, Lego was my escape and a huge passion that grew every day when I played in my room. When I started building things my idea was to build a boat. The moment I assembled what should have been the ship’s hull and brought it up to my “little hand”, it occurred to me to wrap my entire arm with the pieces and make my dreams come true. By putting together a wire and parts from a Bionicle robot I then developed my first moving prosthesis with the Lego blocks.

Do you plan to continue refining the current model?

Yes, a friend of the family just gave me the latest excavator crane that Lego released. It has 4,000 pieces and with it I can make a much more complex and elaborate prosthesis.

In just a few months you’ve become a celebrity: we’ve seen you in newspapers, on the news, giving school talks and on television programs. How does this media impact make you feel? How has your life changed?

It’s honestly really exciting and overwhelming. The lesson couldn’t be more positive because of all the good things that are happening for me. At the Sant Ermengol school in Andorra, I grew up surrounded by the same classmates and teachers who are part of this story and today are thrilled to see me so happy. I am who I am because of them and my family, and they’re an important part of what is happening.

Several universities have shown interest in my idea. Specifically, the UIC in Barcelona gave me an “Outstanding Innovative 2018 award” that made it possible for me to earn a scholarship to study bioengineering.

What do you want to be in the future?

I know that I want to help people through bioengineering. There’s no better career for fulfilling my goals and making my dreams come true using the most cutting-edge materials and technology.

Bioengineering is the fusion of biomechanics and engineering, and the development and application of these skills together with the latest advances in this field will give me the skills I need to fulfill my dream. 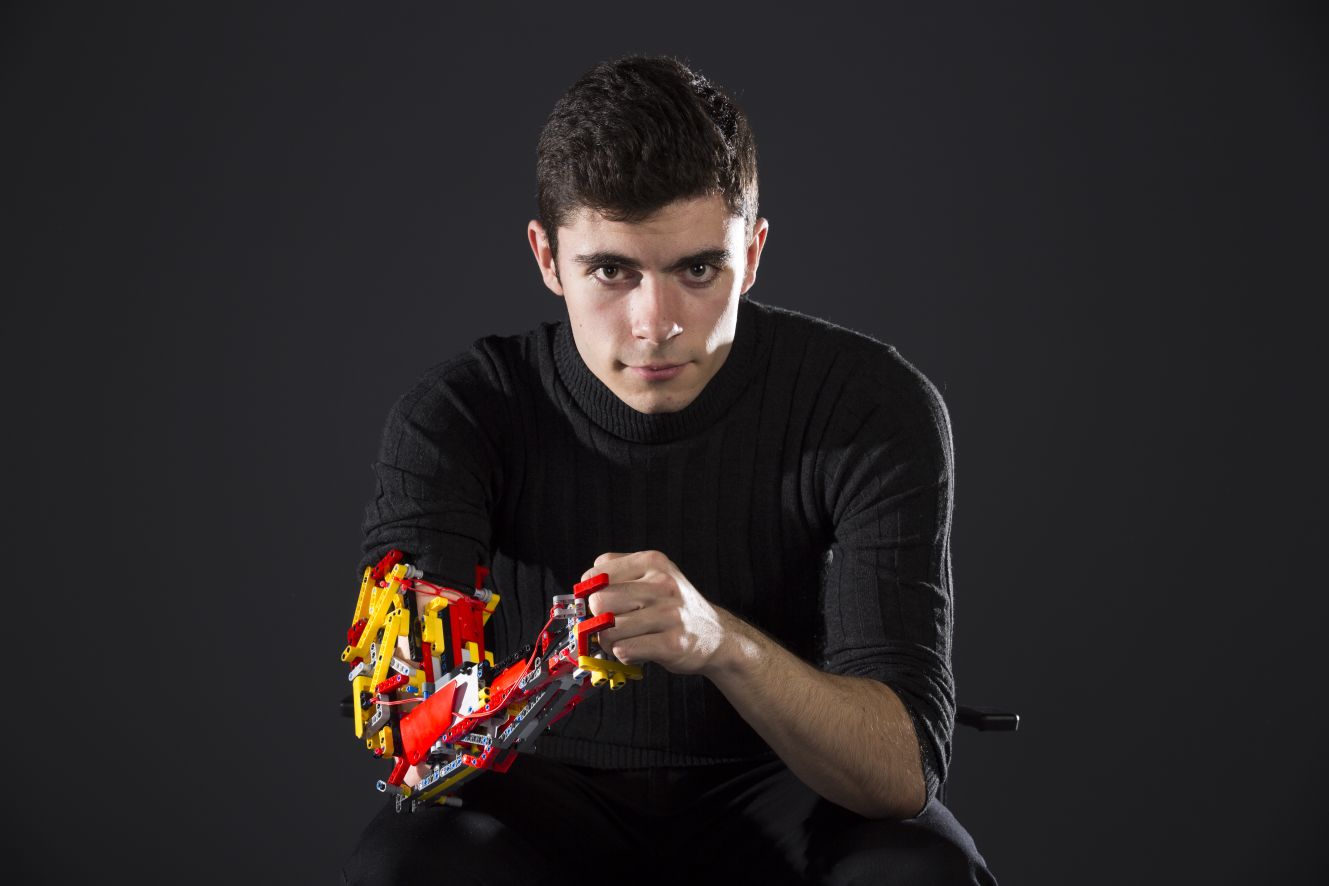 Has any specialized company contacted you to capitalize on your prototype? Is it patented?

No, they haven’t contacted me. I guess everyone knows that it’s still the transformation of a toy with its limitations, although it has called the attention of the most specialized and important journals in bioengineering and biomedicine, which have shared my story on several digital publications. The first prosthesis was a helicopter and the second a plane. The challenge was not to use any other pieces than those I had originally, and I was successful both times.

The filing process is neither easy nor cheap, so I haven’t patented it. I’m focused on my studies and that’s what matters most to me right now.

We’ve seen initiatives in other parts of the world that incorporate projects similar to yours; there’s even a veterinarian in the United Kingdom who made a prosthesis for a turtle using Legos. Have you heard these stories? Have you contacted any of them or would you be interested in participating in any of these projects?

Yes, I heard about this story. As a huge Lego fan I’ve always searched for information online. YouTube and Google are the perfect tools for exploring the most inhospitable corners of the world and finding the most unlikely and exciting stories.

Several Spanish First Lego Leagues have contacted me to invite me to attend their events as an example of improvement and innovation. I made a video for one of them that they broadcast at the opening of the competition. It’s huge to be told that many children think of you as their hero; I was recently told that a fifth grader at a school in Barcelona wants to be a robotics engineer like the boy with the Lego arm.

I was invited to one of the most important technological conventions in the world, Vivatechnology, held in Paris this coming May 24. One of the topics that will be discussed is what they call “the augmented human being”. It refers to the relationship between man and embodied technology and they believe that I am an example of this because of my ability to excel and adapt.

Technology has played an important role in getting your story out there, because all this media coverage happened after your father posted a video of your prosthesis on YouTube. What do you think about the ability to communicate and share information that technology and social media offer us today?

Technology is one of the great passions of my life. I’ve had a passion for it ever since I was little because my father was always using new technologies. Like all kids of my generation, we’ve grown up in the age of the digital revolution, with the benefits that all that entails.

We live in an age of immediacy, of global communication that helps increase our knowledge of faraway places in order to connect more with our fellow human beings.

My story has crossed borders and social media has played a very important role in all this media coverage, but the truth is that the start of all this was something more traditional and simple that will never cease to exist, “human relationships”.

As a young innovator, what do you think about our MoraBanc Digital initiative?

Everything goes through a process of modernization and adaptation to the environment, just like I’ve had to do in my own life. Banks, like other sectors, have to invest in improving service quality and customer experience. Today, bank customers are much more informed and much more demanding.

My father works at the bank, so I’ve been a MoraBanc customer my entire life. I use the app on a daily basis to manage my credit card purchases and track my account balance. I’ve already earned my own money for the first time by giving a few talks in schools, and with MoraBanc Digital it’s easy and simply for me to manage my income. It’s intuitive, practical and above all secure, and that is what users value most. You can tell that MoraBanc has a real interest in advancing as a company, because new features and improvements are constantly being launched that ultimately aim to provide higher customer satisfaction. I believe that we are in a new era of the digital revolution, in which those organizations that have the capacity to adapt to the new rules of the game will survive.

Do you have any advice for people who have an innovative project or idea they want to implement?

The most important thing is to believe in your idea. Then take action and develop it. Communicating the idea through social media has helped me to trust more in my potential. Discussing the idea with family and friends has allowed me to consolidate my idea and think beyond it: a better world where we help with creative ideas so that people can more easily achieve their goals.